Last week I wrote a blog post about my candidate stocks for purchase in the month of July. It seemed like a tough call between DAL, GIS, LUV and T. I felt the competition was eventually between the companies LUV and T. Unfortunately for me, LUV published a very strong quarter report, which made the price increase from the low 50’s all up to $57. So I concluded: “Let’s wait on that one to come down again”.

But days after my article the stock price of T dropped just short of 4%. That’s what we like to see if we’re ready to buy a dividend growth stock; a lower price means a higher dividend yield. The reason for the price decline was their announcement of the second quarter report for 2018. AT&T beat their earnings estimates, but missed the revenue expectations, the first one to incorporate results from its new WarnerMedia unit (sixteen days included).

They also reported good news like the better-than-hoped wireless overall business trends and raised their guidance on full-year adjusted EPS, forecasting a $3.50 number versus an expected $3.38. Management also boosted free cash flow expectations to the high end of $21B range (inclusive of deal/integration costs).

Much has been written about AT&T over the last year. Its declining subscriber base due to cord-cutting, the necessity of the TWX merger and the massive debt load have all been covered numerous times by analysts. According to me, there are some good arguments for the bull and bear case.

I think it’s a reasonable move of management to buy businesses to transform AT&T into a media and entertainment giant and become a producer of content so that they’ll own what they distribute. By doing this AT&T will become a vertically integrated business from distribution to production and consumption of media content. Adding media properties to AT&T’s assets would give the phone carrier also valuable insight for marketers into the viewing habits of its users. In the slide presentation of their recent 2Q earnings announcement was a nice slide about the new business model of AT&T: 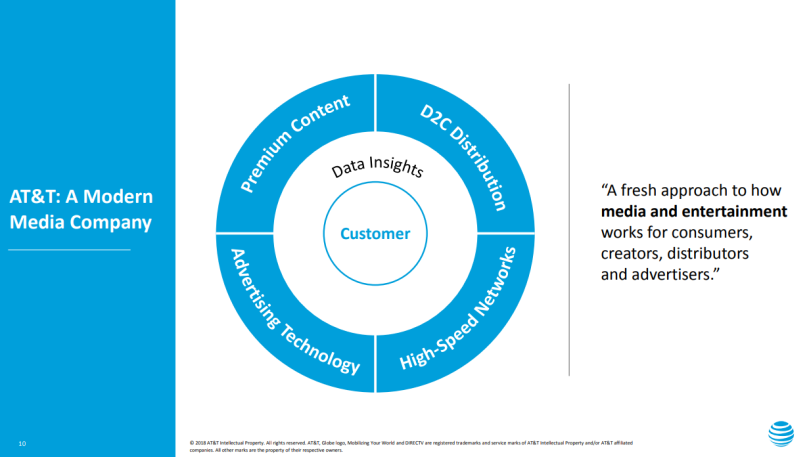 Firms in the Telecom sector are capital intensive, heavily regulated and tend to underperform in bull markets. Telecom has generally been a low-growth, low-return sector due to the maturity of the industry. So, why invest in these companies? Because they also tend to perform better than the market during bear markets, show lower volatility as compared to the market, and usually pay a higher dividend relative to the market average. The Telecom sector has for decades been a low-risk, low-reward sector. Owning some companies like T and VZ function like a hedge for a well-diversified stock portfolio in bear markets.

Heavy infrastructural requirements like scale, availability and transmission speed of their network and considerable financing expenses lead to high fixed costs and lower variable or incremental costs for the industry. A tremendous amount of upfront capital spending in equipment and infrastructure is required before a Telecom firm can provide its services to customers and start generating revenue. This works two ways in terms of operating leverage:

1) Whether AT&T is servicing a thousand clients or a million, a lot of its costs will stay flat. This increases the continuity risk if capacity utilization is suboptimal; a low revenue number and high fixed costs lead to an operational loss. Disappointing operational cashflow numbers also increases the risk of insufficient cash in the bank to pay interest costs.

2) At the same time, the capital intensity of this industry creates massive barriers to entry. In terms of the industry life cycle, Telecom is a mature industry which usually means a few number of firms, and those that have survived will be larger and more dominant. This leads to economies of scale. Telecoms can significantly reduce their average unit costs by increasing the number of customers, because they’re able to distribute their fixed costs among a higher number of subscribers. To put it another way, assuming the same level of service, each new customer will be more profitable than the second last.

But the industry has shifted quite a bit the last couple of years. A big number of customers have canceled their subscriptions to television services available over cable, dropping pay television channels or reducing the number of hours of subscription TV viewed in response to competition from rival media available over the Internet such as Amazon Prime, Hulu, Netflix, HBO and YouTube Premium. This Internet content is either free or significantly cheaper than the same content provided via cable. The stability of revenue numbers (due to subscriptions), earnings and cashflow numbers is into question. The consequences for the industry are tremendous in terms of their ability to pay down debt and dividend safety. Therefor Telecom companies are trying to figure out their next steps for expansion, and even survival. Verizon bought Yahoo, and just recently AT&T completed the acquisition of Time Warner.

So, with all this market uncertainties, bearish arguments, selling and dumping stocks of T going on, I decided to buy another 24 stocks for an average price of $30.31 (including transaction fee). That comes down to a forward P/E for 2018 of just 8.6. That’s incredibly low, even for a telecom company as a high-yield, low-growth income play. The price bottomed since last week and has found its way up again, albeit modestly. The positive thing is the stock price could go up significantly if T’s content media thesis plays out. That’s the beauty of buying stocks at a low valuation. I now own 139 stocks for an average price of $35.61. So every three months I get paid $69.50 for… just not selling it. ☺️

At the P/E ratio of 8.6, I closed in a forward dividend yield of 6.60%. That’s an amazing dividend yield, folks. They’re paying me $0.50 per quarter. So adding 24 shares totals to $12 on a quarterly basis. This is much higher than my preferred step-in yield of 4%. At the same time, the dividend yield will only go up with small amounts in the future.

AT&T has increased their quarterly dividend for 34 years in a row. That’s an impressive number of years. With that streak they’re classified as a true Dividend Aristocrat. The most recent 2% increase is in line with previous ones; the 5 year dividend growth rate is in the 2% range. That’s certainly not a positive, but what you see is what you get and there’s nothing wrong with that, imho. This company isn’t in my bucket for growth reasons; it’s there next to other stocks, because of its solid dividend yield. Investment returns from slow growers like AT&T can be significant if bought at lower valuations as compared to their historical mean. That’s exactly what I did at a P/E of 8.6. Nice!

The dividend payout ratio based on analysts consensus of earnings of $3.53 in 2018 and a ttm dividend of $2.00 equals to 57%. This seems on the low side, but a big amount of the earnings must be retained to pay debt and future dividends, or can be reinvested into business activities. You can see that T needs to really focus on capital allocation; they have a big number of debt, their dividend is critical for many investors, and as a capital intensive business they are always in need of capital for reinvesting in their network.

GuruFocus states that AT&T’s highest return on capital (Joel Greenblatt) over the past 10 years was 28.98%. Their current return on capital is 18.99% (calculated using ttm income statement data). Their ROC % is ranked higher than 56% of the 470 companies in the global industry. It’s fair to say they’re an average performer.

With this additional buy I have a full position in AT&T. I’m positive on the deal with TWX, business opportunities with 5G, IoT and their shift on advertising. Multiple income streams are always a good thing if you’re operating in a highly competitive business sector and you’re facing a shifting consumer behaviour. I’m a bit worried on their debt load, but I think management was very realistic in their latest earnings call and put the right emphasis on this topic. They have an ambitious plan on reducing debt for the next years. Besides, I expect them to sell some non-core assets which could enable them to pay down debt even faster than planned.

What did you buy lately and have you considered buying shares of AT&T?

My goal is to build a dividend portfolio that will pay enough monthly income to cover my living expenses.